tl;dr – Despite the setback of DADT and Prop 8, LGBT visibility in pop culture has never been better. Our turn to be the cool kids.

Seeing how this is the third article here on coolyourgrits, I’m still not entirely sure what and what-not to write on this blog. I guess this is what happens when the only rule I have set for myself so far is to 1) keep writing and 2) not write about grits. So far so good right?

One of the things I’ve noticed recently is how far the media has portrayed the LGBT in pop culture. From comic books to television to radio and movies, it seems like we have finally entered the golden age for LGBT awareness.Now don’t get me wrong, I don’t mean that everything is peach-keen (that’s phrase still a thing, right?). Rather that through media and self-publishing outlets such as WordPress, Reddit and YouTube, we have collectively decided that it’s finally ok to talk about this once-tabooed subject.

I certainly don’t mean to say that there’s no gay voice ten years ago. Ellen DeGeneres came out as a lesbian in her short-lived sitcom in 1997, and before that Amanda Bearse (who played Marcy D’Arcy in Married… with Children) in 1993. Those were definitely very important milestones in the LGBT community.

But if you look at the bigger picture, the only recurring gay characters on TV from ten years ago were Jack McPhee in Dawson’s Creek and Will and Jack from Will & Grace. The characters were written to be gay for a purpose. Will was written to be the “straight acting” one while Jack was anything but. As important as that show was at the time, there were hardly any character development over the years they were on air.

In 2003 Bravo launched Queer Eye for the Straight Guy. As groundbreaking as that show was at the time (at least for metrosexual awareness), it’s difficult to go back and re-watch the show with today’s mindframe. The show has become very dated, and in a very good way. 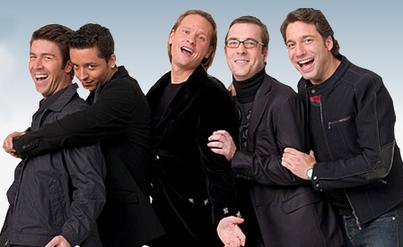 Can you still name all the members of Fab 5?
Image from Wikipedia

Compared to the shows today ranging from Brothers & Sisters to Modern Family to 30 Rock to Glee, gay characters have increasingly become more prominent and multi-faceted than ever. While Glee is a fun take on musicals gleaming (sorry) with gay characters, 30 Rock has consistently written characters into the show with strong personality first, sexuality second. For example, Devon Banks can easily be a straight character and be just as quirky, but the fact that he’s gay (as his weakness to Kenneth the page) simply adds another dimension to his character. Similar things can be said with Brothers & Sisters and Modern Family. The fact that we have gay characters today who are more than “just gay” is something we’ve never seen before.

And LGBT awareness has gone beyond television. From David Sedaris‘s every new book release to the many celebrities coming out, the spectrum in gay public figures is wider than ever. Videogames from The Sims to Fable to Dragon Age: Origins has explored open-ended options that doesn’t tie strictly to heterosexual storylines.


Sex scene from Dragon Age: Origins can be
triggered if you play your cards right

Then there’s Proposition 8, a ballot proposition to add the phrase “only marriage between a man and a woman is valid or recognized in California” in the California Constitution. The fact that the proposition was passed by a simple majority (within 5 percent difference) and that it was funded largely by an out-of-state religious group, had caught national attention. As awful as it was to see prop 8 pass, the proposition finally got the mainstream media talking about LGBT rights. The proposition was in a way the stepping stone in bringing back the discussion to repeal the 17-year old Don’t Ask Don’t Tell policy. The fact that this is being discussed and that the majority of Americans are now against the outdated policy is simply unheard of ten years ago.

In response to the many reports of recent teenage suicides from being bullied for perceived of being gay, Dan Savage launched the It Gets Better Project to promote awareness to anti-gay bullying. It again caught national media attention within a week of starting the project, so much so that President Obama, Secretary of State Hillary Clinton along with many companies and countless public figures spoke out against school bullying.

It seems so long ago to think the trouble Ellen DeGeneres was in for coming out on her own sitcom and gay characters were simply written as a single-layered comic relief, yet that was only ten years ago. If anything, it almost seems cool to be gay in today’s pop culture. At this rate, I wonder where LGBT will be in the world pop culture in next ten years? Perhaps there won’t even be an answer, and that would be the best answer of all.